Did You Know? The Merriams and Cherry Brook Farm

The Owl debated this morning between talking more about water bills (gah!) or spending some time with one of her favorite old families, the Merriams. Those of you who take that winding road on the northside of town may know its namesake (not personally–no one is that old) but many may not know the full history of this family who once made a huge difference in this town. Yah, I am not telling you all the details, for that you can seek out Pamela Fox’s book. All of the following is based on that book. Except the photos of my dog.

The first of the Merriams in town was Charles. Born in Concord in 1803, he soon saw what a thriving retail mecca Weston was (much like it is today, haha) and went to work in 1821 at Lamson’s store. Is everyone familiar with Mr. Lamson? What about his playground? No, he didn’t build that. Charles was a great success at merchant business and took over the store after Lamson died in 1824. But surprisingly, Weston’s period of being a retail center ended in the 1830s and Charles turned his gaze to Boston, and the fashion mavens of Newbury Street. Not sure about the latter actually, but he moved on to the big city, while keeping ties with Weston–he gave the first donation to the town library ($1000 in 1859 was a bunch of money) and in 1865 he was the original benefactor of the Merriam Fund for “The Silent Poor of the Town.” which still exists today. He created the fund “to serve a one-time need for hard-working people of the town who have a short-term financial crisis, in a quiet and confidential way.” Sadly, Charles met an “accidental death” later that year which is not explained anywhere I looked. He was a big loss to the town, though his son and grandson would make their own marks on it.

Herbert was the fifth of seven children of Charles and Caroline Merriam. Born in Boston, Herbert served in the Civil War, suffered no gruesome injuries (there’s a war you do not want to know much about), came home and married Fanny Hawes of Boston. Herbert established the Cherry Brook Farm from 150 acres at the corner of Concord Road and Merriam Street (then Lincoln Road) He liked really big stuff–a huge mansion (1875) and the so-called Merriam Barn (1876) was one of the largest in Middlesex County. It had three levels, a massive stone ramp up to the hay loft and stock pens that you can see through the buckthorn and bittersweet slowly reclaiming the ruins. You can see it best in winter, by the way, which is why every single year I wish to get together a volunteer group to try to clear it. Right now, I’m not so interested because it is covered in poison ivy. Which loves me. It is not mutual. 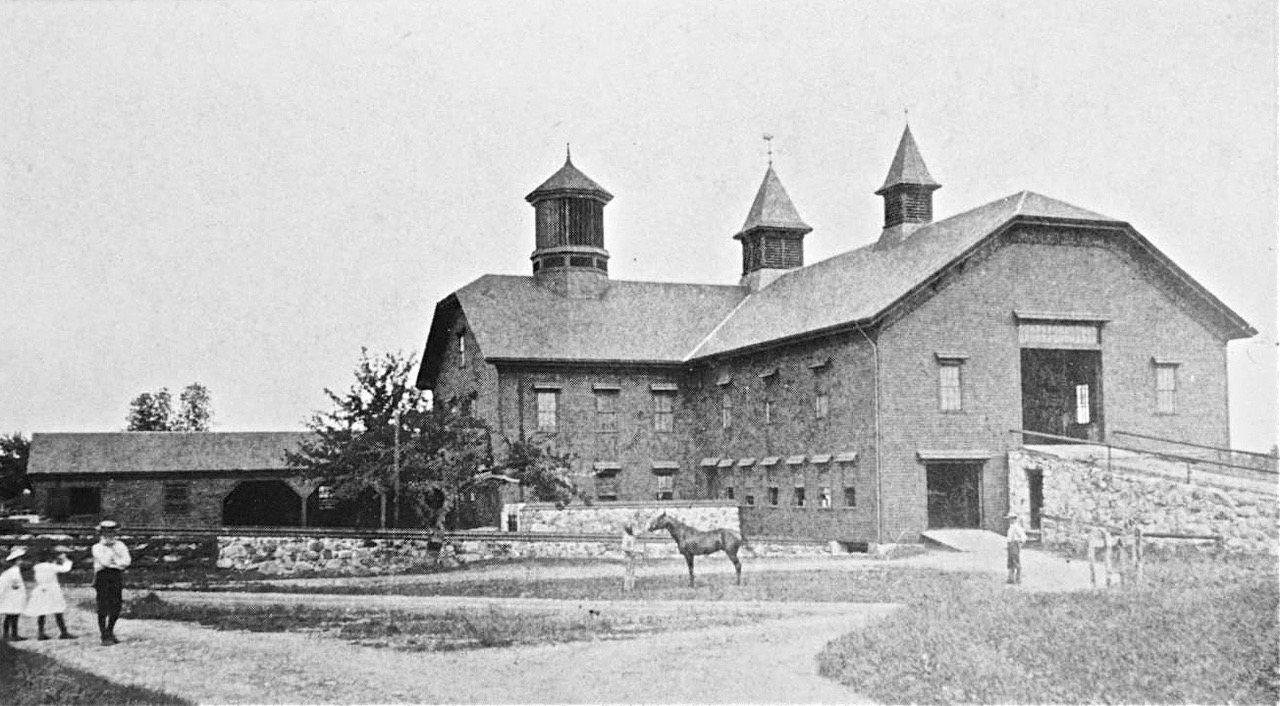 Prize-winning cattle were kept on the ground floor, while hay was one level up. At the very top was a windmill that drew up water to a large water tank. Apparently, there were some design or execution flaws, and one day, the water tank fell all the way through the two floors beneath and killed some of the cattle. I am not sure if the engineering firm was later sued, but I doubt it. People had other stuff to do in those days.

Herbert had a son named Charles who did all the de rigeur stuff like going to Harvard (class of 1893), worked in textiles for a time, and spent his free time hunting, fishing and golfing. In 1904, Charles got serious and began managing the farm and did a spectacular job at it, according to all written accounts (one written account–my time is limited). The farm grew and grew and by 1916, the Merriams had 231 acres of woodland, hayfield, piggery, trotting horse exercise area and even a de-commissioned one room schoolhouse.

The biggest pride of the Merriam father-son agricultural powerhouse was the livestock, which won some prizes before their premature doom. In 1915, foot and mouth disease broke out in most of the area, and when the cattle at Merriam’s farm were discovered to have it, every single one of the herd of sixty was led out from the barn and to the field below the current brush dump. There a large trench had been dug, and the cattle were shot one by one. Disney likes to come up with a family tragedy or two in their movies, but this trumps it easily. Charles, who was 44 at the time, died later that year, officially of angina, but most believed he actually died of a broken heart. Until a few years ago, so I’m told, a dog or two would still come back from a good dig in the field with a large cow bone. Spooky Halloween tales.

Herbert would outlive his son by 11 years, dying at 84 years old in 1926. He sounds like an absolute character who would wander off one morning to the station with his toothbrush and not return for weeks or months as he traveled the world (this is possibly a nice fiction, but I like it). He was opposed to progress and never had indoor plumbing, and would not allow automobiles overnight on the property. Nine months after Herbert’s death, the next tragedy befell Cherry Brook Farm when a fire swept through the barn. With no hydrants nearby, the fire truck drove down to College Pond and ran hoses…but it was too late and that magificent barn was no more. Except for stock yards and a ramp you can still see. In the next exciting edition of Weston history, we’ll see how the property eventually ended up as the Town of Weston’s.

If you go for a trail walk, you can park your car right outside the brush dump (60 Merriam Street, across from Community Garden). You cannot park in the brush dump because the knotweed will get you. No, it’s just closed. As you walk through the Conservation gate to the left, you will shortly come upon the stock pen’s granite gate posts on your right. Continuing onwards, the so-called onion field will be on your left (now farmed by Land’s Sake) and then you’ll come across some of the grandest sugar maples you would ever hope to see. In the fall, this place is magical, from the large hole in one tree to the carpet of gold and orange (see cover photo). Farther along there are other ruins (please be careful) of foundations–up the hill are the foundation stones of the Merriam house.

If you take a right, you can loop down through the apple orchard, and then take a right through the Doomed Cow Field. and up alongside the Doomed Knotweed Area (body bags everywhere). Then you can see the ramp of the Merriam Barn still apparent near the return trip to your car. It’s a pretty amazing old foundation.

If you choose, you can take a longer walk through the College Pond area and see some of the town’s best walking trails and the famous Troll Bridge. Send the Owl a note and she’ll meet you and bore you with these stories a second time.

Yes, I will talk about water bills later, but first a walk. Guess where we’re going?